Shaheen Merali’s oeuvre extends from large-scale installations to remapping colonial history through collages and batiks. Acutely aware of how popular culture acts as a carrier of social prejudice and invective, his work is exercised specifically by the racial and racist content of popular culture. Whether it’s his series of life-size paper constructions of black celebrities or his use of flowerpots and toys to represent people of colour, Merali explores and questions the relationship between racist desire and disgust, between consumer goods and art fetishes, between the sweet icing of kitsch and brutal racist violence.

Through his work, it becomes clear that the most trivial objects of amusement carry an inordinate wealth of history, knowledge and prejudice. “Blackpop” covers the last decade of his work while referring to earlier work of the 1980s, with an introduction by the artist, Dave Beech, and essays by art historian Jean Fisher, film historian Adrian Rifkin, and film-maker Hito Stereyl. 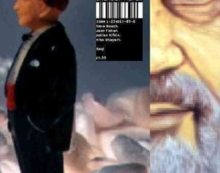