A Kirkus Best Book of 2018, Akissi: Tales of Mischief brings together the first volume of the hilarious and heartfelt Akissi comics by Marguerite Abouet, the award winning author of Aya of Yop City.

Poor Akissi The neighborhood cats are trying to steal her fish, her little monkey Boubou almost ends up in a frying pan, and she’s nothing but a pest to her older brother Fofana. But Akissi is a true adventurer, and nothing scares her away from hilarious escapades in her modern African city.

Jump into the laugh-out-loud misadadventures of Akissi in these girls-will-be-girls comics, based on author Margeurite Abouet’s childhood on the Ivory Coast. 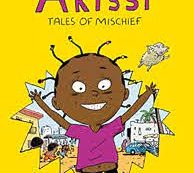